Reading Event: Currently holding a reading challenge aimed at Japanese learners of all levels. Join the Discord server and check the #announcements channel for more info.

Visual novels are only Microsoft Windows programs, therefore you must use Wine in order to run them.

Follow the steps below to run VNs on FreeBSD.

By default, FreeBSD is unable to display Japanese text.

You can install them from binary package by doing:

FreeBSD also does not use Unicode by default. So Japanese filenames will be broken. You need to add these lines to your /etc/login.conf

Now rebuild database for this file: Log out by using pkill -u $USER and log back in.

If you are using KDE, create a file called locale.sh in $HOME/.config/plasma-workspace/env/. If the directory doesn't exist then just make it. Add the following contents:

This is important as we will need hardware acceleration. If you haven't already installed graphics drivers on your FreeBSD system, please do that now.

If you are having issues with the binary packages, try compiling from the ports.

Wine on FreeBSD has limited functionality compared to its Linux counterpart. For example, you are not able to run 64-bit applications with Wine and you also must use the i386-wine package of Wine if on an amd64 system. Do not be fooled by this name, if you are on a 32-bit system, use the regular wine package. However. lack of 64-bit support is not an issue for visual novels, as they are all 32-bit anyway.
First install all the needed dependencies for Wine first, this is to ensure you don't end up in "Wine dependency hell":

Now, we need to install Wine:

We will now need winetricks, do not use the one on the FreeBSD repository as it is outdated and WILL cause headaches.
Using, curl, download the latest winetricks binary.


Using chmod, make it executable.
Now copy it to your /usr/local/bin so it can be used in a command line.

First we need to create a 32 bit Wine prefix, this has the best compatibility and 64 bit doesn't even work on FreeBSD anyway.

When Wine is started for the first time, you will need to let it install Gecko and Mono packages.

Now we need to install the common redistributables such as DirectX, Visual C++ Runtimes and .NET Framework 3.5 and other things that make video cutscenes work.

You can do winetricks fontsmooth=rgb because without it, the font is simply awful.

You can open the Registry Editor using wine regedit and import this .reg file, the GUI should look nice and clean then.

When installing ffdshow, make sure you check (tick) ☑ every single codec/format or else it will not work!

For some VNs, such as TYPE-MOON's, LAVFilters may be needed to playback video.

Some games may break if you have both ffdshow and LAVFilters installed! Make sure you experiment!

Then, run this command to disable DLL overrides, and use the native DLLs instead:

You need to install Japanese fonts to Wine now. Please download the pack below.
[Google Drive]
Unzip the file and move the font files to your Fonts folder in $WINEPREFIX/drive_c/windows/Fonts

$WINEPREFIX is usually in ~/.wine. You can do export WINEPREFIX=~/.wine to use this variable.

Why not install cjkfonts in winetricks?

Because it doesn't work properly for VNs.

FreeBSD does not have CDEmu, FUSEISO or anything similar, so you'll need to mount the disc image file regularly. Luckily, FreeBSD doesn't make the distinction between virtual drives and physical drives.
BUT... FreeBSD does not support the simple mounting of drives without using mdconfig and EXECUTING AS ROOT! Even accessing a mounted disc image requires you to have root privileges.
You cannot execute Wine as root so we will not be mounting image files. So we will be using 7zip.

If you have Alcohol 120% CD/DVD Images (MDS/MDF), you need to use tools such as mdf2iso. Common syntax is

In other cases you may be able to rename the .MDF file to use the .ISO extension and it will just work.

Let's first make our destination folder and cd into it.

Now, extract it with 7z:

Now we can finally launch the installer with Wine.

If the installer executable is an .msi, run with msiexec instead of wine.

I used Kanon Memorial Edition for this guide. I can cd into $WINEPREFIX/drive_c/KEY/KANON_ME_ALL and then run REALLIVE.EXE with Wine to launch the VN at any time.

For AlphaROMdiE, you need to run it with Wine and the VN executable as an argument. It should look like this:

And viola! Here's a demonstration of 2 VNs working at the same time: 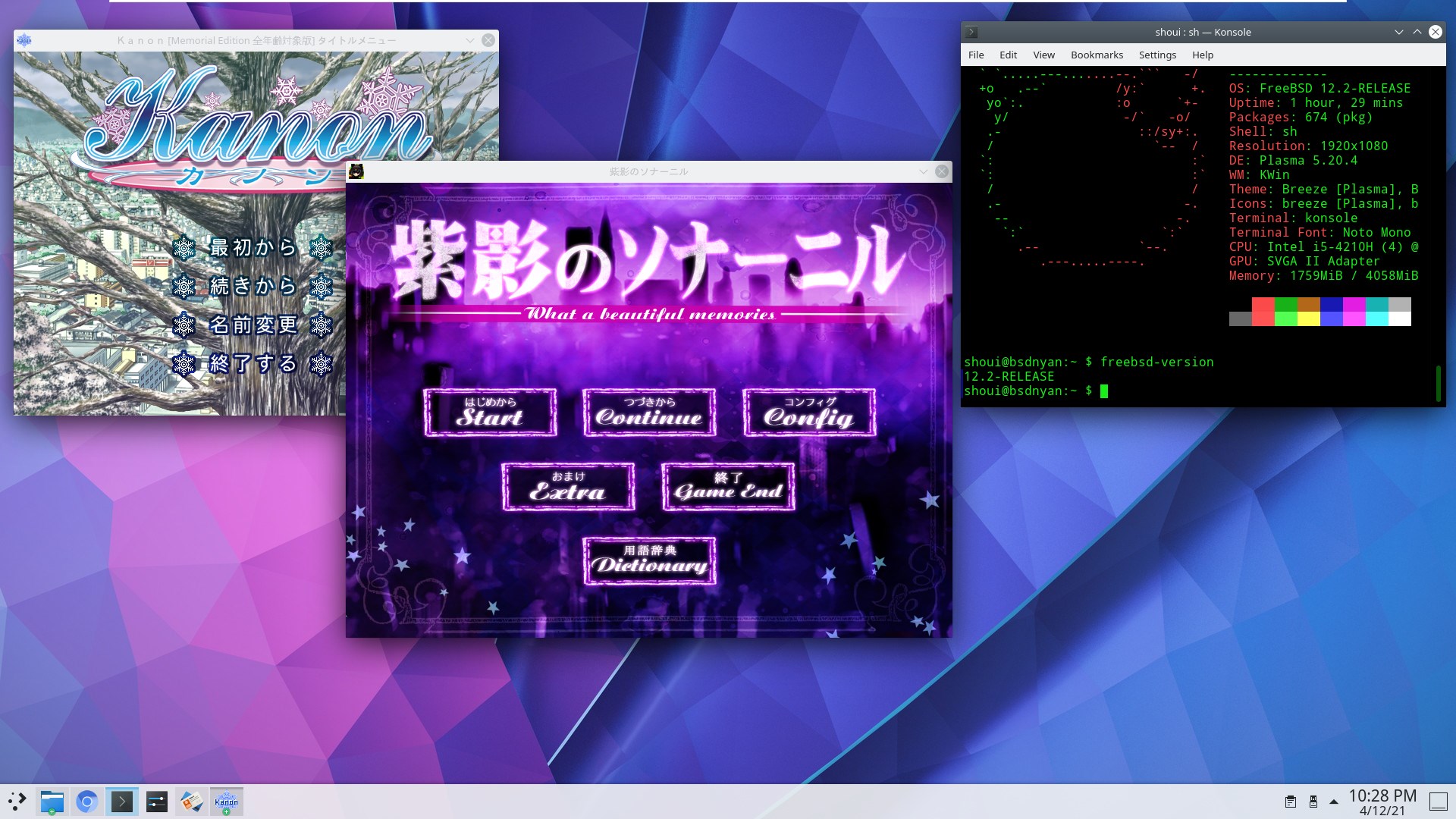 And the actual games work see: 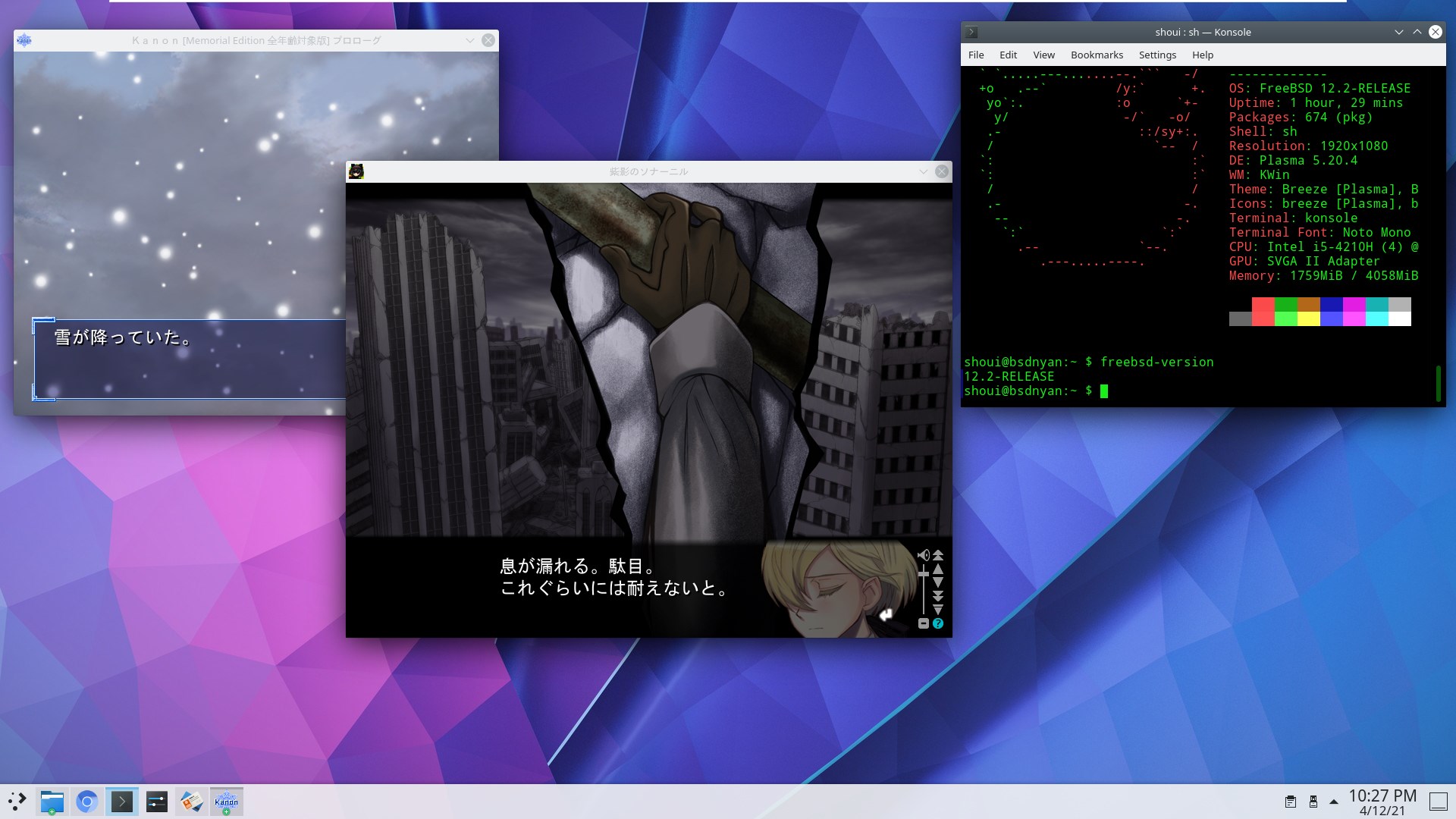 Now go back to Visual Novel Guide to learn how to use Textractor, it works perfectly under Wine. Please note that it needs to be launched with LC_ALL=ja_JP.UTF-8 environment variable.

You can add shortcuts to your ${HOME}/Desktop. Create a file such as "[vn].desktop". You can also put it in /usr/local/share/applications so it appears in application launchers. Here's how I am launching Kanon from a shortcut (with the icon too!)


Remember, paths to icons must be absolute!

VNs made by Fuguriya such as Sono Hanabira ni Kuchizuke o and Hanahira will not launch with Wine by default. Follow the steps below to fix this.

Now it should just work.

Found this useful? Consider supporting me on Patreon!

Support me on Patreon